OK, the superintendents just left after providing an hour of “couldn't we do it this way?” Most of which I squashed with 1) a bit of flexibility 2) saying that come December, I'll direct the thing and 3) saying “no.” They like how we're going to change the puppet theater into a ship, and then turn the ship into a sand dune. Good times. All I want to do now is drop dead of exhaustion — between cooking, birthday-partying, cleaning up from said party, putting dinner together, and justifying my words, I'm effing done. Done, I tell you! And in two minutes, the Boy is going to awaken from his nap. Zowie.

I think it's funny that i just got a spammer trackback request on my “Gun Control or Psychiatric Drug Control” entry from Adderall. “Maxium dose of adderall xr for an adult. Adderall side effects.” I'm thinking, maybe that person should take a little less Adderall and a little more spelling.

Boy-o turns two early next week so his birthday festivities began three days ago. I made from-scratch blackberry muffins for his nursery school class and they even put candles in his. I can't wait to see the pictures! Then this morning at 10:30 we had a birthday brunch with eight adults and four toddlers. It was the perfect ratio of grown-ups to kids. After brunch there were presents and panda-bear face cake (black icing is gross and boy-o was covered in it). By 12:45, all the guests had been gone for an hour, Monstro was off to teach his Saturday class, and the guest of honor was asleep. Good times!

Once I get the rest of the house picked up and the rest of the thank-you notes written, the Sunday School superintendents are coming over to give me notes on the Christmas pageant I wrote. I'm dreading their comments more than I've EVER dreaded a playwrights' lab. Cross thy fingers…

I guess you'd better take me to your leader, then! 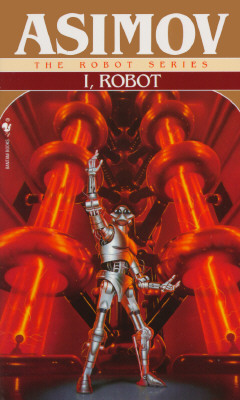 You're I, Robot!
by Isaac Asimov
While you have established a code of conduct for many generations to follow, your demeanor is rather cold and calculating. Brought up to serve humans, you have promised never to harm them, to follow orders, and to protect yourself. Living up to this code has proved challenging and sometimes even drives you mad. If you were a type of paper, you would be pulp.
Take the Book Quiz
at the Blue Pyramid.

I have a book deadline of the 23rd, which is my birthday, so I asked for an extension to Monday. 🙂

We have our André, our Jay, and our Daniel Franco. The first challenge was to choose from $50k of Mood Fabrics after a foot race across Bryant Park. Tim looks impeccable and now works for Liz Claiborne. Heidi is… Heidi. You don't hear much about hot, sweet, German women with multiple kids. She's in a class nearly by herself, behind Andrea Schnichels, who was my host mom during my 1988 AFS trip to Europe.

Simone's a cross between Laura and that attorney from SF who was out first on Season Three.

Rami will wear many, many tank tops. Welcome to the Gunn show.

The stoner chick's our Santino.

22 minutes in: We might be seeing less of the Boomtown Rat soon, too.

Tim challenges Moon Unit, who blows it off and takes a NAP.

Looking at final six: Moon Unit's model stumbled on the “poo-ing fabric” train (thanks for that, Heidi), but I'd throw out the baby-doll guy just for that inmate-striped cabbie's hat he's wearing. And I don't care what Michael Kors says, but the gray drapey dress made the model's tits look saggy, and that's *never* chic. My call: Boomtown rat to win, bad-hat man to lose.

COMMERCIAL: Tim wins the poll with 54%.

Ricky (Hat Guy/Daniel Franco) is in.

Simone is out, because her dress looked like she hand-sewed it while drunk. Just goes to show that you can't be a Laura, and you'll be out first every time, if you don't know how to sew.

COMING UP THIS SEASON: Big surprises. And Jack drops some sort of metaphoric bomb on the workroom. See you there!

Thanks for the prayers!

In other news, I just got my two entries for the West Coast 10-Minute Play Contest back, because that contest doesn't exist anymore, but I parlayed them into my entries for the Boston Playwrights' Theatre upcoming Boston Theater Marathon. Just back from the post office, where I sent those, plus many Rhythmball DVDs to interested parties. Whoot!

Does it count if you cross things off your list that weren't already on your list? I just finished writing that Christmas pageant, and called my repeat client who, thankfully, won't really be ready to go forward with anything until December.

I'm awaiting knowledge of my hard-and-fast deadline for the book, too. Figure I'll do some make-up-time research during “Reaper” tonight. I wish they'd go more Screwtape on that show. We need more exposition about the Devil from Ray Wise's own mouth.

OK, back to the book again now!

Nov. 16: Friday Night Social Club with Dr. and Mrs. Slash and the Ladies.

…and then, the following week, Monstro and I will be deposed for my gender-discrimination lawsuit. Can't wait!

UPDATE: Thanksgiving alone with Monstro and the kid has turned into a Thanksgiving Open House to celebrate my birthday. Y'all come!