Yeah, he loves it nearly more than he loves me. 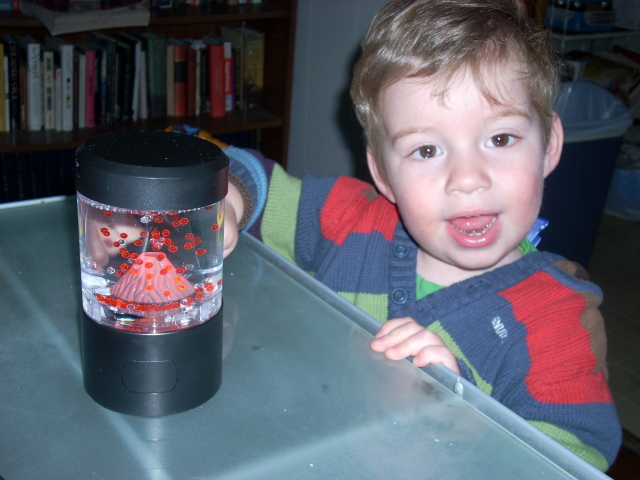 This is as close to his “baby” facial expression as I've seen in months. 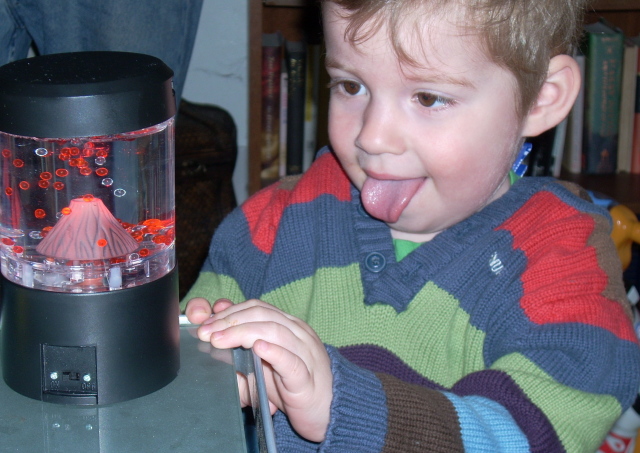 I stick out my tongue when I'm concentrating, too. Don't believe me? Look at my graduation photos. 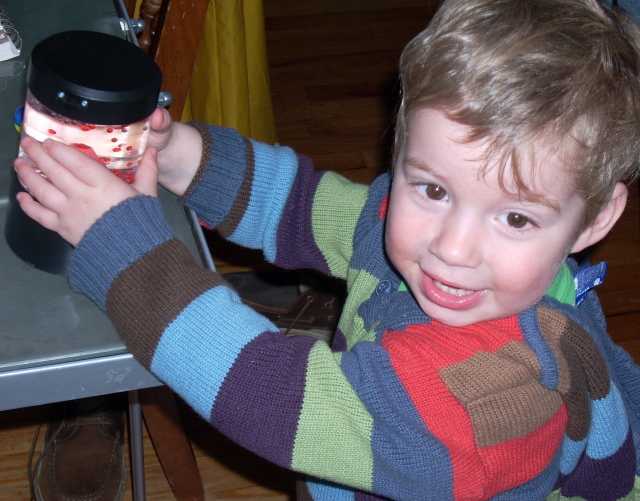 My dad sent Lex an volcano. It is his favorite thing on the planet.

Please go to www.Hopeline.com and learn more about their mission, and why it's so important to help wrest them away from the clutches of the federal government. This 2.5 minute video will tell you more.

My housemate Alex killed himself years ago and not a week goes by that I don't miss him.

I've been tossing and turning since midnight, hotter than asphalt on a southern July, and finally at 2:30 Lex came to our room.

I located our boy and took him back to bed, picking him up. He was roasting.

“Too hot!” he said. No kidding. I took his temperature and it was 101.7. Then I took mine, and I'm a full degree-and-a-half hotter than I usually run.

So I put the boy in his crib, and put the fan on him, and left his door open, and turned on all the ACs in the house (with the big one set to 70 degrees on Energy Saver), and then picked up my pillows and blanket (wishful thinking that that'll be necessary). But before bedding down on the Futon of Torture, I just had to tell you guys about it.

Remember when we used to be up at 2:30 on Friday night/Saturday morning for FUN reasons?

UPDATE: No sooner had my head hit my pillow than I heard a cough from Lex's room, followed by a more pronounced “hoark.” Ruh-roh. Went in to see his crib sheet covered in, uh, liquid. Stripped his bed and remade it, put him in the bathtub, washed him well, got him blotted dry, gave him some applesauce and children's ibuprofen and a new clean sippee cup of cold water, put him into clean diaper and jammies and took his temperature again. 103.2 for my troubles. Ugh. Gonna be a looong night.

… because we're going to be paying a LOT of babysitters so Monstro and I can go to the movies this summer:

Lest you think I fritter away cash on silly entertainments, I think the last movie I saw in the theater was the last “Harry Potter.”

So Grant Miller makes a weekly feature out of how people get referred to his site, and I don't have anything else to post about, so I figured I'd check my own referrer stats.

This month alone, 13 people have found me by searching “hated breastfeeding,” three people clicked over from Myspace where someone ripped off the picture of Lex and his buddies around the piano he got for his first birthday (since removed per my request to Baberaham Lincoln — thanks, Babe), and singles came over from Googling “Harvey Birenbaum death,” “snakes on a plane coincidence” (for which I am #1 on Google), “project runway model tits” (for which I am also #1 on Google), and “filthiest movie ever.” (“Pink Flamingos,” in case you wondered.)

But my faaaavorite one out of all of them is the person who clicked over after finding a link to Motormouth on, of all places, the Transportation Security Administration's blog. Yes, someone linked to me from tsa.gov. Can you stand it? Go here and search for “throwing away water.”

Oh, hey, here's another search for Harvey, and another three who hate breastfeeding, and someone else who found me by googling “TSA toddler food” in Canada.

…and another five who hate breastfeeding. God, I hope that goes better this time.

I saw that Fringes had posted Open Friday today and I was all, “How cute… Open Friday a day early.” Nope. Today's Friday.

It's been another busy week — Mom took possession of her apartment on Monday and so there's been a lot of shopping, hanging curtains, setting up her computer, getting her a TV via Freecycle, you know, good stuff like that. I've been spending a lot of money on her credit card, which has kind of transported me back to high school. 🙂

Lex and I spent a couple of hours over there yesterday and he totally made himself at home — flushed her toilet, played on her bed, jumped on the loveseat. Typical two-year-old stuff. It was fun! I fed him lunch and then Monstro came to take the boy home for a nap, and Mom and I waited around for the Comcast guy for another few hours. I'm pleased to announce that he was massively flirting with me. Hey, I'm seven months pregnant; I'll take what I can get!!!

In other pregnancy news, so far, so good. Lex and I went to my doctor appointment this week so he could hear his baby brother's heartbeat. Except he threw a major fit in the waiting room and finally a nurse asked us to leave until it was time for the doctor to see me. No lie. Once it was time for us to be re-invited, my nurse told me that I was getting “props” from the back-room staff as to how I was handling his tantrum. Lex did get to hear the baby's heartbeat (and was pretty well-behaved for the actual office visit), but seemed more interested in the doppler ultrasound device. The doctor even let him press the “off” button! Good stuff.

Baby is great, and I'm still feeling stellar, though a bit tireder than I have been. Of course, this might have something to do with the fact that Lex keeps getting himself out of bed before 6:15 every morning. Naah.